Menu
If there is nobody to take your call at school Monday to Friday and you need to speak to someone urgently, please call the school mobile 07502 178523. Remember that you can contact teachers on their 2020 emails and admin and headteacher too.

We are all really missing you and I am sure you are missing all your friends too.  This page is dedicated to all the fabulous things you have been doing at home during the school closure.  If you have any pictures, updates or videos you would like us to look at and share please email us and we will add them to this page.  We are proud of everyone's efforts and cannot wait to hear from you! 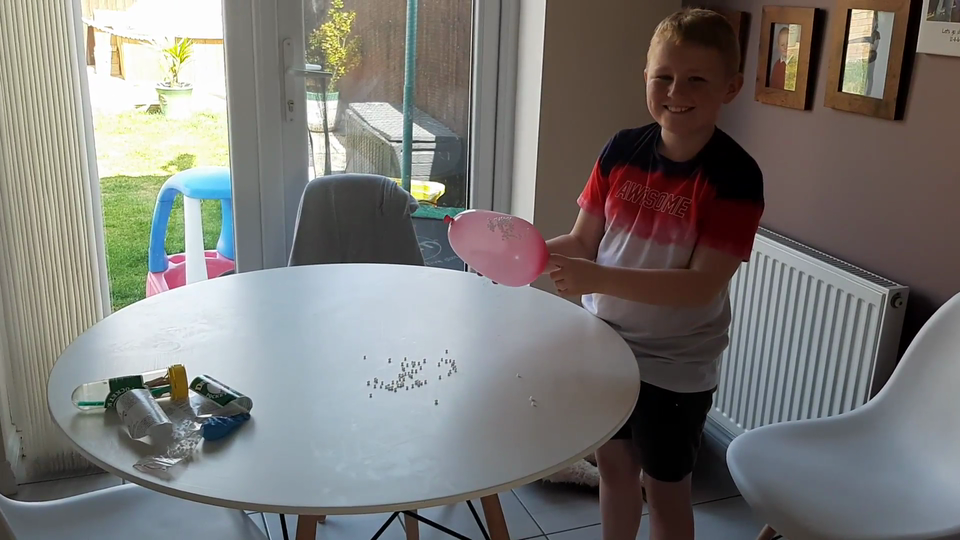 Olly has been enjoying finding out all about France and baking and tasting some French specialities. We are excited to see that the butterflies are now fully formed and have been released.

Owen has been working on division with remainders and he and Ellie have been brushing up their punctuation in a very creative way.

Look at Lucas' artwork- he is definitely an artist of the future!

Jenson has been growing vegetables, crafting and making delicious biscuits.

Lucas has been working hard - completing work on bar charts and pictograms, practicing handwriting ; and doing lots and lots of reading !

Logan’s mum said they had some sea shells delivered after her mum saw them and ordered them, they looked like a clam. And were very smelly, even smellier than Charlies feet!

The clams were opened by Logan , Charlie and Mum with dinner knives, they were so full of pearls of many different colours. Logan's Nana told them a piece of grit or sand gets in to the sea creatures shell. It irritates the creature and it moves it round its shell. The inside of the shell is made from mother of pearl and this is a pretty multi coloured shiney surface, which collects on the grit. This is how the pearl is made. Pearls are not round, unless they are man made. They are all different, just like us. The ones they got have had some dye put in so they came out different colours. They were still very pretty coloured and are lovely to see.

Ivor made a fantastic display in his garden for VE day, Keaton has been practising his handwriting and maths and Imogen and Elliott have made a collage of all their super activities

Imogen has done some superb writing based on The Paper Bag Princess. Can you spot her adverbs and her expanded noun phrases?

Matilda has been very creative while at home. She has made her very own castle in the garden with her daddy, decorated biscuits and made buns as well as painting. She has also enjoyed being outside playing football and going for walks.

Sebastian has been learning about the world. He made a huge world map; labelling the continents and oceans. He also found out facts about Australia as well as making a model of the Eiffel Tower in France. 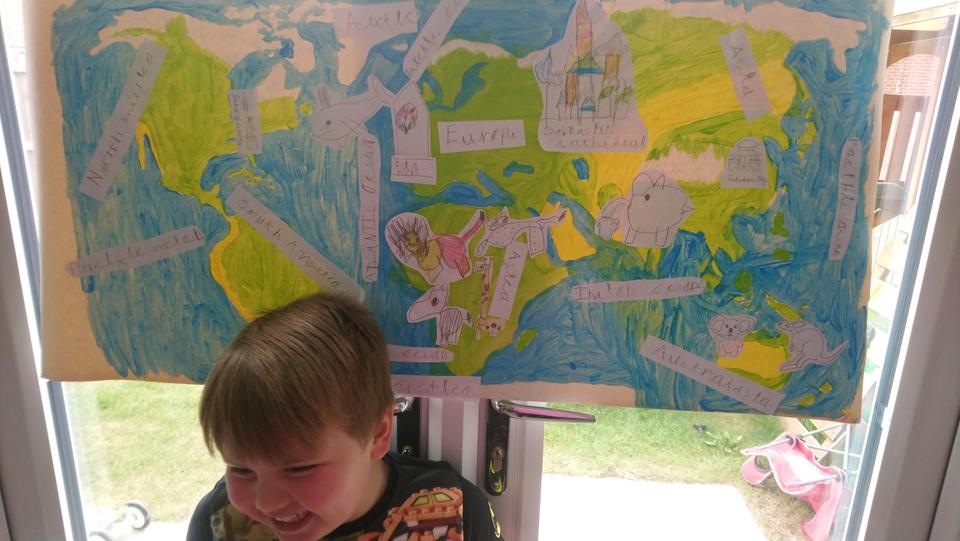 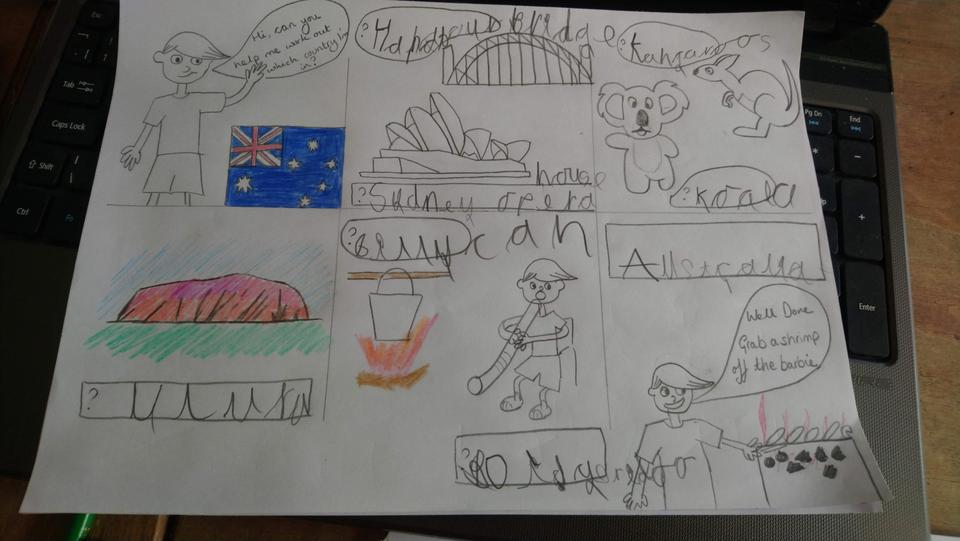 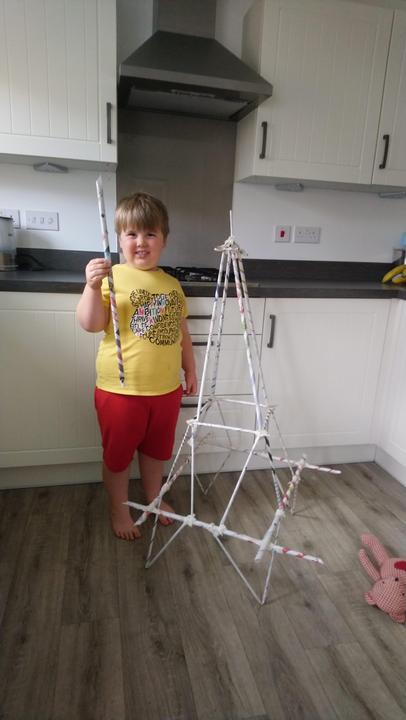 Ella has completed her animals from around the world work and created a very real looking treasure map. Ahoy m'hearties!

Owen has been busy on some shape work whilst Laylor has had time to prepare afternoon tea, make some flags and get a face-mask organised for the end of lockdown!

Sophie received her certificate for her sponsored bike ride. What an amazing achievement Sophie!

Logan had a great time celebrating VE day too!

Harry has been busy over the weekend creating this fabulous chair with his dad for the garden using pallets. It looks super!

Look at Lily-May's fantastic drawing - it is beautiful!!

Harry and Lexie have been very busy- building, baking, looking after abandoned ducks and much more! Lexie is famous too- can you spot her in "Hensall Now and Then"?

Grace has been working hard in Science- what a fantastic booklet and diagram!

Sophie's sponsored bike ride to raise money for a hospice was cancelled but she did the ride anyway (and more!) and is going to get a certificate. Well done Sophie!

Thomas and Juliette have been busy researching a topic, creating a PowerPoint and then presenting to the family. One presentation was about trick horse riding and the other was about Ole Gunner Solskjaer. Who do you think did which one? They have also been helping with cooking tea! Well done!.

Ann Marie has been very busy creating a beautiful chalk rainbow, rescuing 2 baby rabbits and taking them to the RSPCA, making a pizza and she also enjoyed eating it!!

Ellie and Owen have had a busy week so far with a Star wars day, completing multiply and division, making night lights from recycled plastic and tissue paper and making pies yummy!! Well done!!

Harry has worked extremely hard to research Pontefract Castle this week and created a super model of it and a writing description. Well done!! 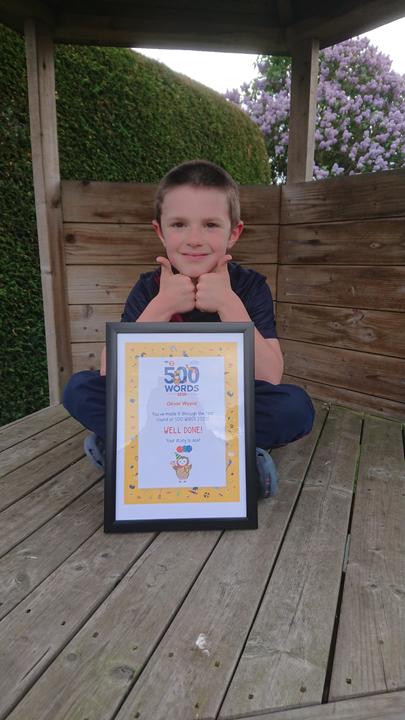 Oak class are so proud of Olly who entered his story 'Rocky Saur - The Noisiest Herbivore' into Radio Two's 500 words competition. There were 135,000 entries and when they chose the 5000 best ones for the second round, they chose Olly's story as one of them!

That the end of the tale for Rocky Saur this year but we think it is such a huge achievement to finish a story and make it through to the second round. Olly has already written a second instalment. So who knows.....next year could be Rocky Saur's year to win!

I know that this success will give Olly lots of confidence when he is writing in the future.

Everybody in Willow class is continuing to work very hard and their mums and dads are thinking of exciting ways to keep them motivated and happy. Sebastian received a letter from Peter Rabbit setting him a series of challenges to complete. Bethany and her parents have made handprints in dough to remember the time they have spent learning at home together. Look at the photos to see what everyone has been doing.

Crafts, exploring and adventures from Andorra, Olly and Jess

Ellie has worked very hard this week: creating a PowerPoint of animals from different continents and also produced a fabulous week's worth of literacy work, which I have added a picture of her final letter.  Take a read! 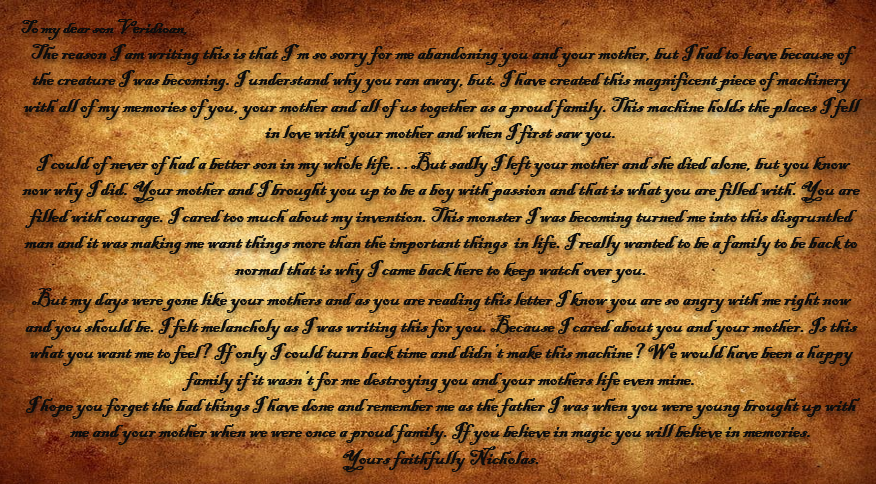 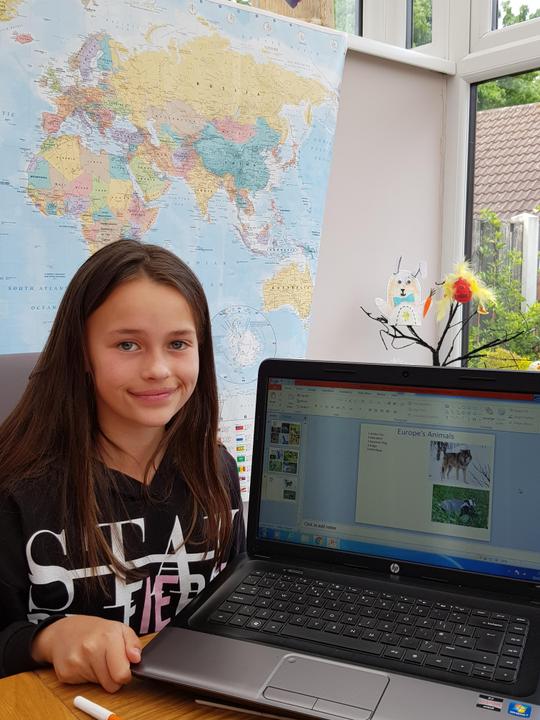 Ivor has been sewing scrubs bags for the NHS, Ella has been finishing her continents booklets and Mia has been doing a range of fabulous activities including lots and lots of reading. Keep it up!!

Is that Wally and a unicorn doing Fancy Dress Friday with Joe Wicks?

Willow Class have just received a certificate and photos of the donkeys they raised £121  for at The Wonkey Donkey Sanctuary. Well done everyone! 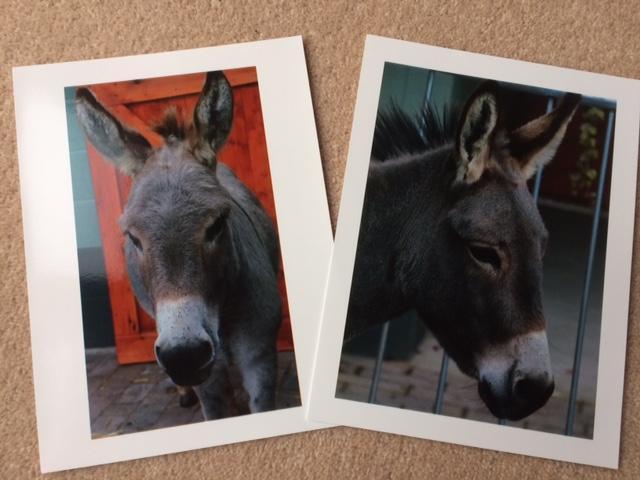 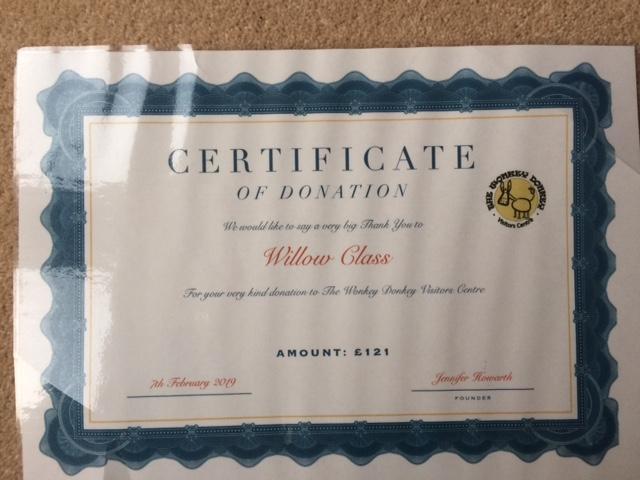 (Toby is on the left and Millie on the right)

Beech children have been busy! 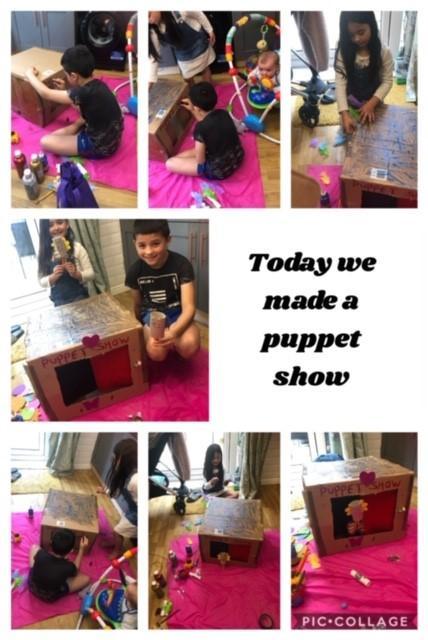 Laylor and Tristen found a fantastic way of entertaining their little brother!

More industry from Oak Class! Hairdressing by Ella. Nerf gun maths from Fredde and all sorts of wonderful activities from Emily even though she has broken her arm.

Fabulous writing from Imogen and Ella. Click on the photo to enlarge

Henry has been helping with lambing on his farm as well as writing a book about sheep and making a model of his farm.

Look at all the fantastic maths Raia has been completing - very proud!

I was very proud when I heard that Leighton had put a box of games and books in the bus stop in Kellington for others to take and donate to. What a great idea! BBC Radio York even rang his mum asking to speak to him. 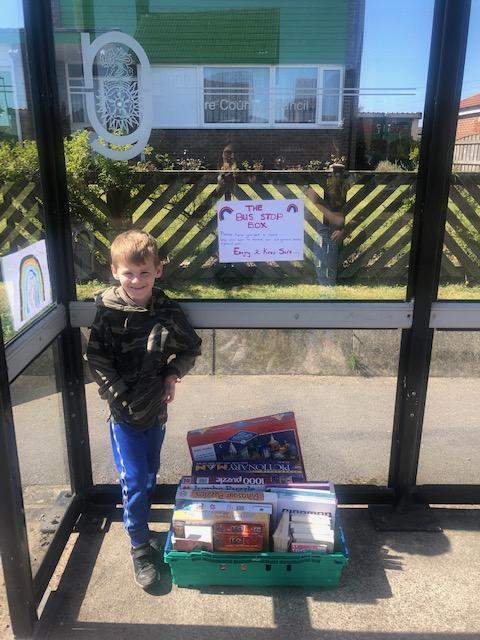 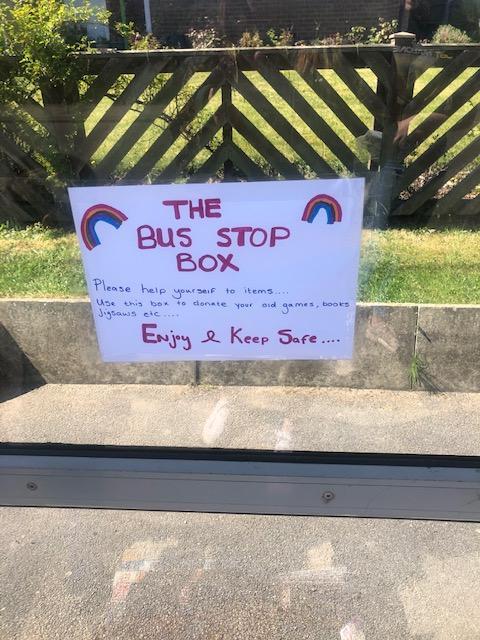 Willow class have been very busy over the last week doing lots of great things and having lots of fun in the beautiful sunshine. Look at their photos and you might see something you would like to try.

Beech children are having so much fun! 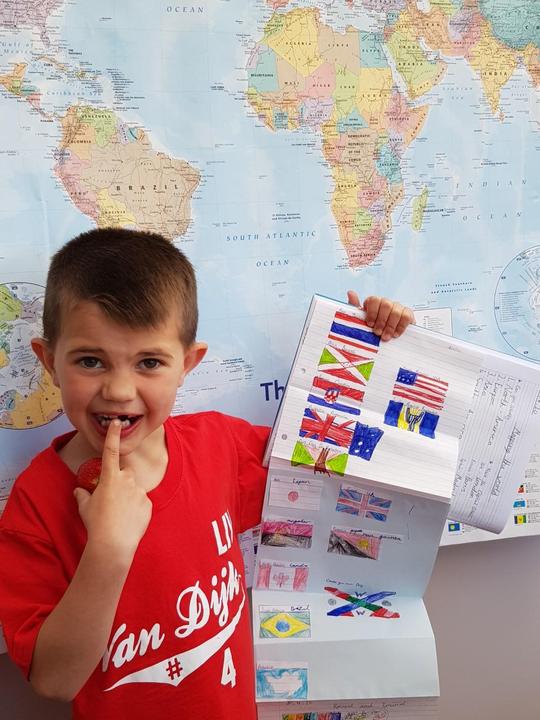 Owen has been doing some great map work and researching the flags used by different countries. Super topic work Owen!

Owen has also lost his front tooth! I bet the tooth fairy has been super busy during lockdown!

Izzy has been busy drawing chip from Beauty and the Beast and making collages of characters from Winnie the Pooh. Izzy, Juliette, Eloisa and Lily-May have all made a friendhsip group logo using the first letter of their names!

I bet you wish you lived at Laylor's house. Look at these delicious pizzas! And she has DIY skills too.

Bryce was thrilled with the writing work on Icarus - he has a game about minotaurs !

Take a look at Ellie's fantastic Easter egg design!! She has linked it to our class book 'Wonder' and I think it is absolutely fabulous!! Well done!

Freddie created this fantastic piece of natural art inspired by Andy Goldsworthy after exploring a colour investigation lesson on https://www.thenational.academy/online-classroom. Visit the Oak Whole Class page to find out more!

Imogen has been learning about the continents using a special 3-d jigsaw and doing some fabulous writing. Click on each picture to make it bigger.

Lexie and Harry having great fun! That brownie looks delicious and what an amazing sword! 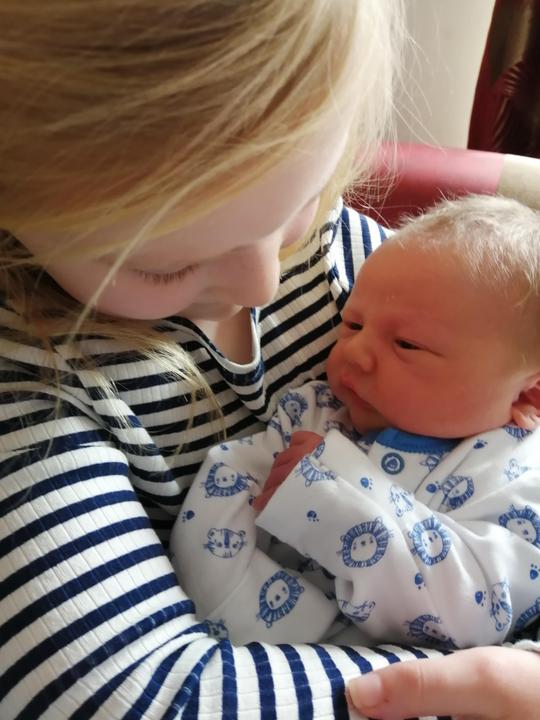 Not only has Lucy been working hard and practising her music skills, she has been helping look after her new baby brother George who arrived on Thursday.

He weighed 7lb 1oz. Lucy has already been reading to him!

Everybody at Hensall School sends lots of love to Lucy and her family.

Jessica and Will working hard at all kinds of things!

Logan enjoyed baking with his Mum- they look yummy!

Alfie has been very busy at home. He has been concentrating hard to make sure his painting and drawings are the best he can do. Alfie and his family have been on lots of walks and he has enjoyed riding his bike. 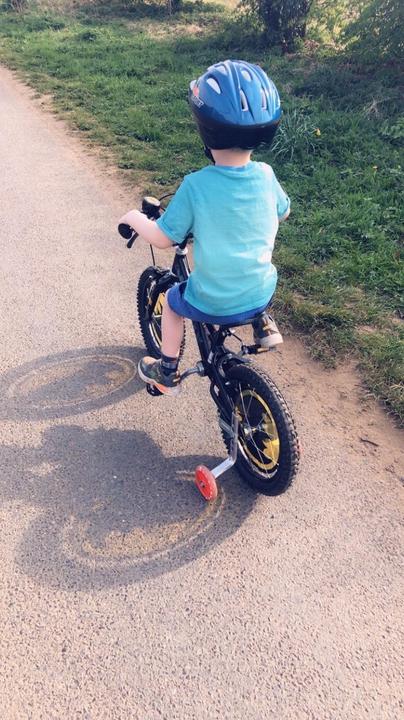 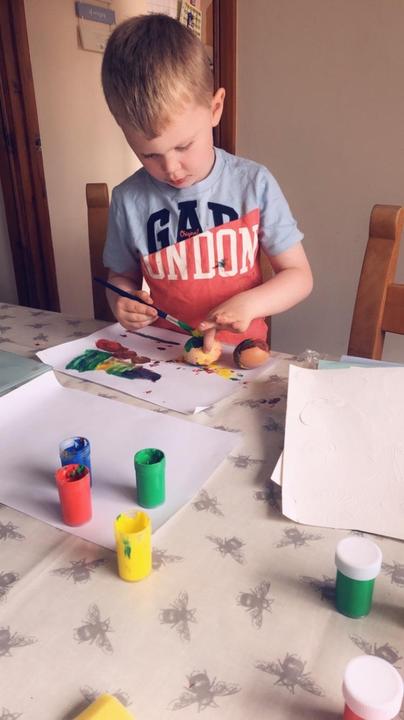 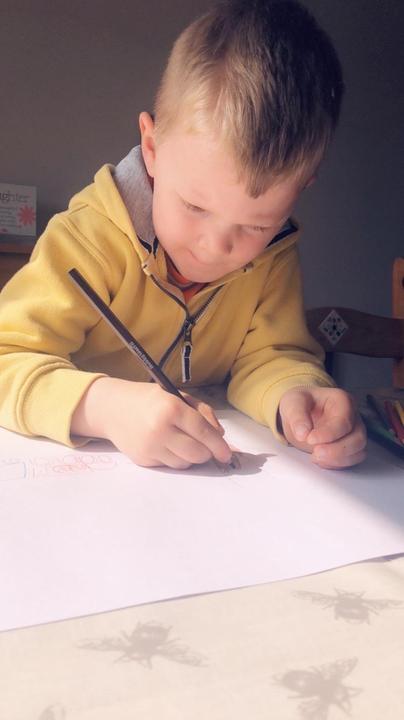 Sophia has been very busy making and drawing. Can you see what is special about the pattern on her butterfly's wings? 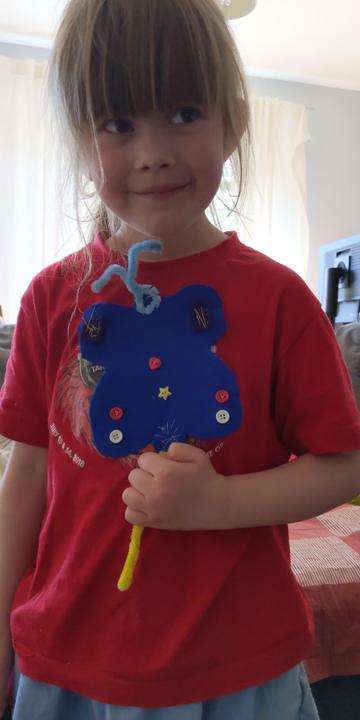 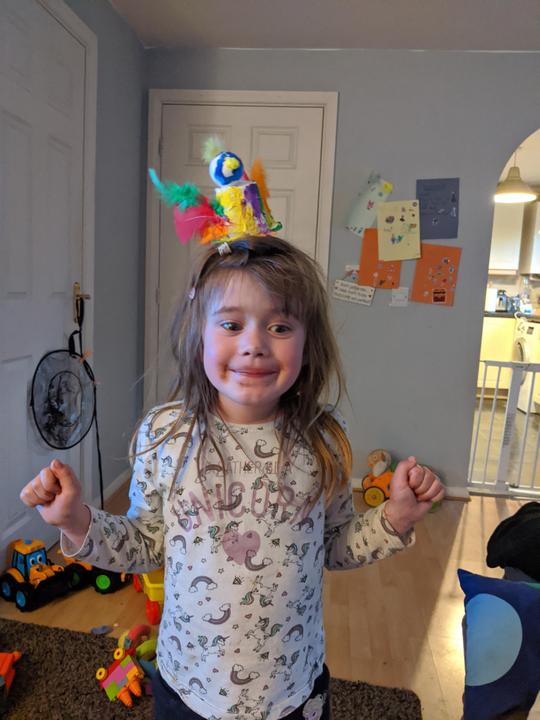 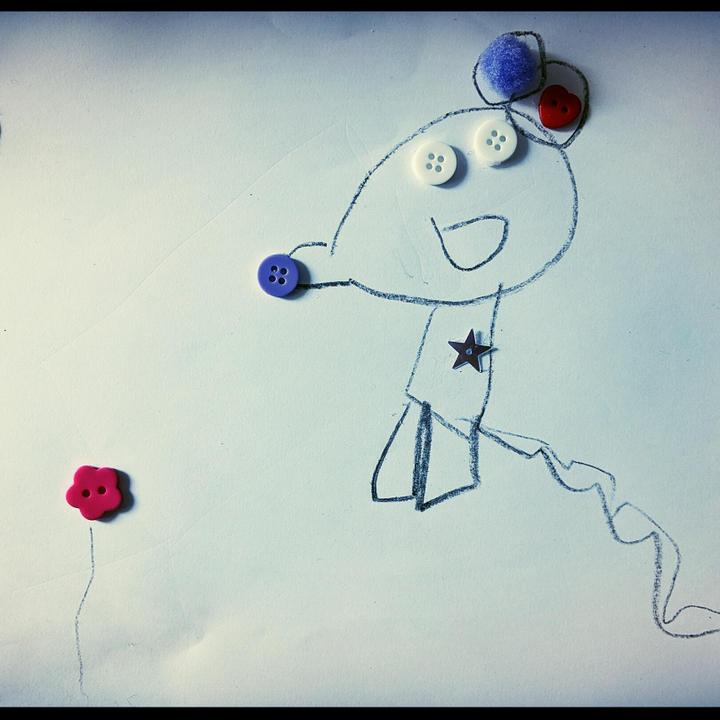 Look at the other exciting things that the children in Willow class having been doing. 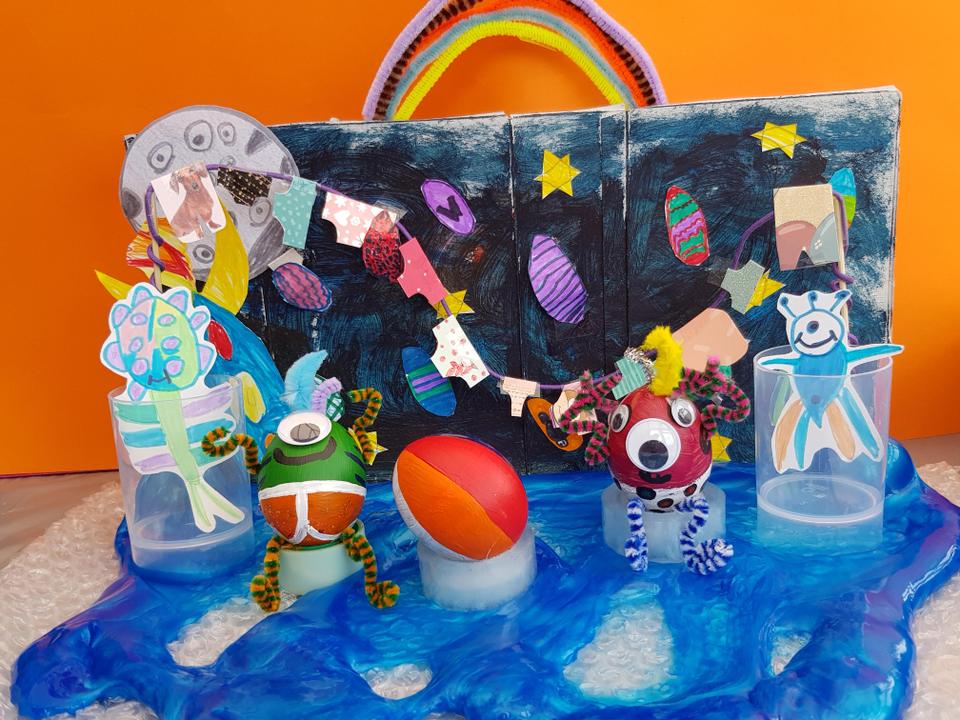 We may not be at school to hold the Easter egg decorating competition but Owen in Oak class has not been put off! He created this amazing scene based on the book Aliens Love Underpants.

If you want to read the poem that this book is based on, it forms part of the English package of work on the Y2 section of the website for this week.

If anybody else has decorated an egg we would love to see the results. Just email a photo to your teacher.

Ben and Emily have had a go too! Great work you two. These would surely have won a prize!

Freddie in Oak class challenged himself to make a marble run that lasted 30 seconds exactly. Watch this amazing video to see how he got on. Well done Freddie. This is amazing! 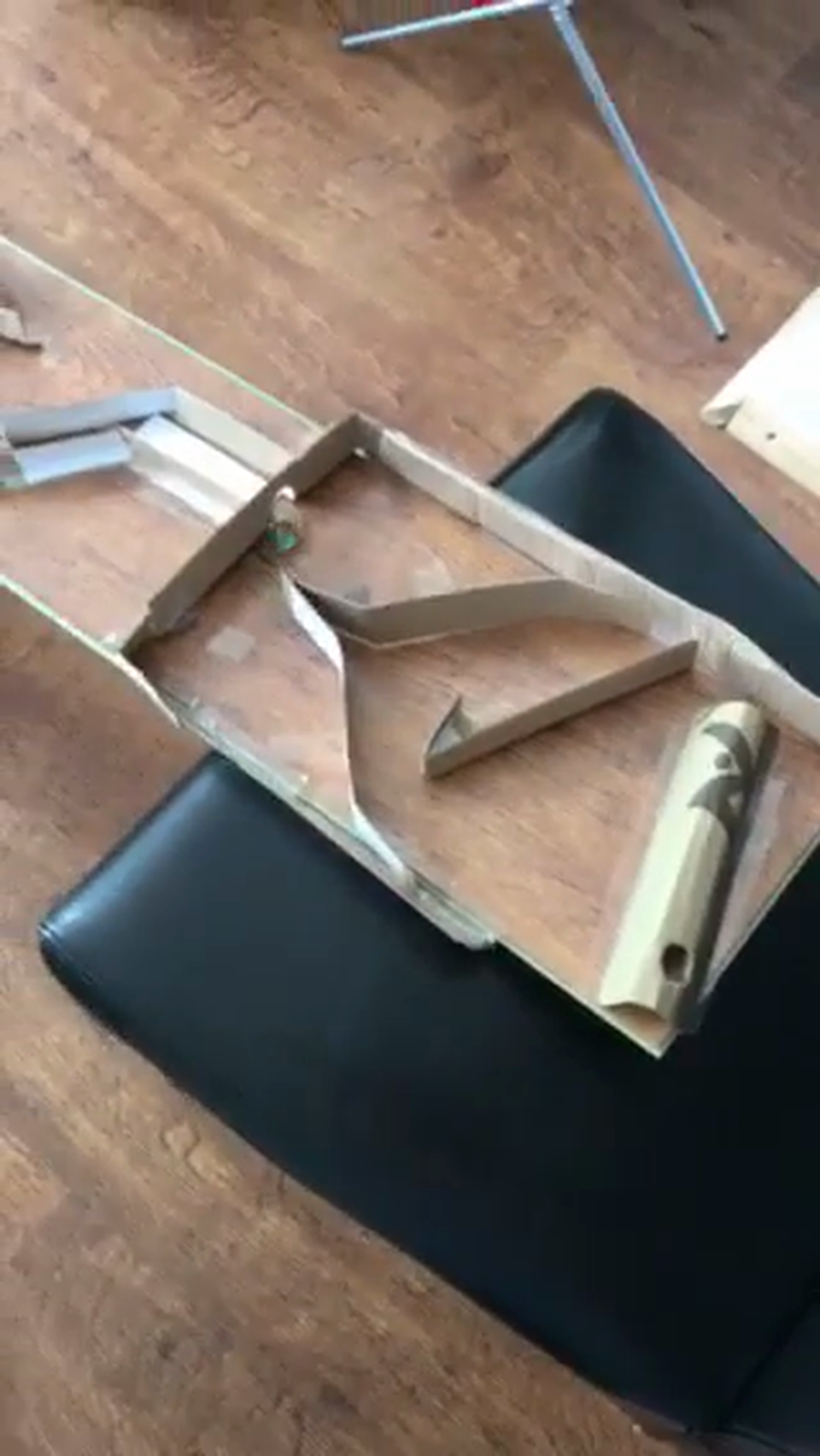 Jessica and Olly have been keeping active and have been awarded two fantastic medals for their efforts. Look at these pictures to see what else they have been doing. If you want to try the bouncy egg experiment, go to the Oak class Y1 science page.

Selby Times News – Things that made us smile this week!

Wow what a proud teacher I am after hearing the news that Izzy had made this page in the Selby Times for her fabulous story based on ’The Beast of Buckingham Palace’ by David Walliams.

Izzy is such a dedicated pupil and this just shows her enthusiasm and desire to be the best that she can be! 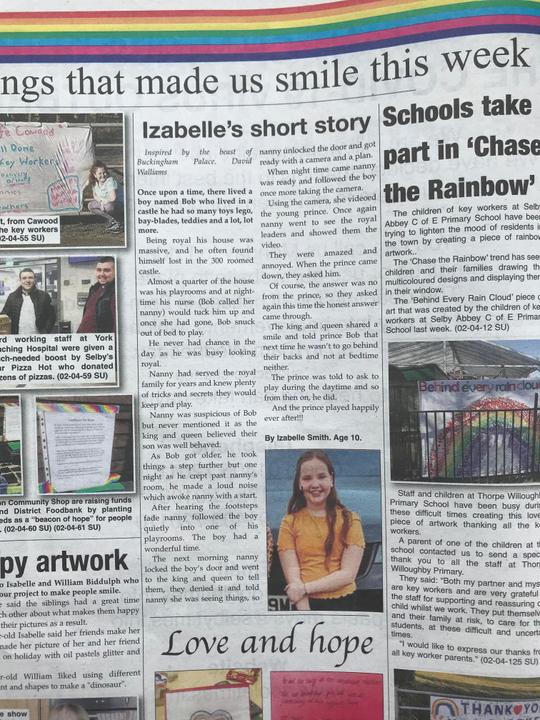 Will and Jessica creating gorgeous rainbows!

Oak Class have been so busy! Look at the pictures below to see Laylor's fabulous t-shirt design and Emily's renovated mud kitchen, Easter modelling and stone decorating. Dylan has been exploring the solar system and Ivor has been organising a new farm.

Lily-May has been very creative and she has also been getting lots of exercise on her lovely horse!!